Have you ever gotten the munchies from smoking marijuana? For centuries, cannabis has been used in medicine to treat or alleviate symptoms caused by various illnesses. Up until the 21st century, marijuana was only valued for its ability to enlighten its users. However, today, cannabis has been making a name in the industry for its multiple benefits. In today’s article, we will answer the question—does cannabidiol affect your weight?

How THC and CBD affect our body

Now, the endocannabinoid system plays a big role in regulating our body. This can include regulating our response to temperature (homeostasis), appetite, brain activity, muscle activity, and even sleep.

From a biological standpoint, the mammalian body produces its own cannabinoids, these are called endocannabinoids (endogenous). Phytocannabinoids are produced by the plant itself, and so phytocannabinoids interact with our bodies in a slightly different way.

Now, the endocannabinoid system is quite a complex topic. Put simply, the system consists of various cell receptors, most prominently CB1 and CB2 receptors, that are distributed across the brain and the body.

In contrast to THC, cannabidiol can produce antagonist effects. Much research shows that cannabidiol, when bound to its corresponding receptors, can produce antidepressant, antipsychotic, anticonvulsant, antinausea, antioxidant, anti-inflammatory, antiarthritic, and antineoplastic effects.

As we mentioned above, THC is an agonist to the CB receptors found within the brain and body. As an agonist, THC will increase feeding behavior in people, by increasing hormones that drive hyperphagia.

Cannabidiol, on the other hand, acts as an antagonist on receptors located both within the brain and around the adipose tissue of the body. Theoretically, the consumption of CBD leads to a blockade within the CB receptors. In doing so, this results in suppression of appetite and therefore a reduced caloric intake.

In addition, a study done in 2016 evaluated the effects cannabidiol had on adipocytes. The study demonstrated that cannabidiol does indeed have the potential to promote browning in 3T3-L1 adipocytes.

3 Tips How you can Lose Weight with CBD Oil! 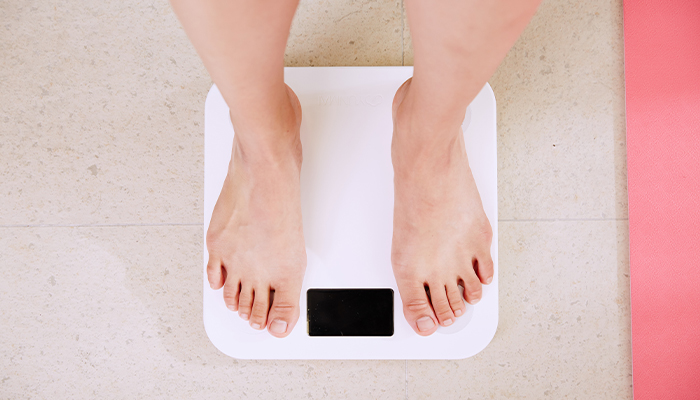 Before we dive in any further, we must clarify that is are simply not enough studies that dictate what is the right dose for weight loss. When using CBD oil for weight loss, you will need to start with the lowest dose possible, and gradually increase your dose with time.

So, does Cannabidiol help with Weight Loss?

It is crucial to remember, that the science behind how cannabis affects our body is still a mystery. To date, the scientist has stated that cannabis can change our feeding behavior. And, it is the alteration of the feeding behavior which leads to either weight loss or weight gain. Classically, THC is considered to be an appetite stimulant. Consumption of THC leads to increased levels of dopamine within the body. Increased levels of dopamine results in an increased need for food. Conversely, cannabidiol is an antagonist to the CB receptors. Consumption of cannabidiol leads to lower levels of dopamine. This means that you’re less like to consume high-calorie dense foods. Thus, weight loss may occur due to the inability to consume high-calorie dense foods.

Understanding the difference between CBD isolates, broad-spectrum, and full-spectrum can be quite confusing. So, we decided to sum up all the key points that you can understand exactly how a CBD isolate differs.

CBD Oil for Horses: Things You Need to Know

CBD oil for horses has a very broad safety margin and can be safely used for horses that suffer from pain and inflammation, anxiety, stress or poor appetite. CBD does not seem to cause adverse effects in horses.

Some people find it difficult to pick the optimum CBD dosage for themselves. In this article, we bring clarification to this commonly asked question. There are some important factors to consider that will influence your dosage rate.